The View from This Seat: In Memory of Thomas Merton

The View from This Seat: In Memory of Thomas Merton
Posted by Chasing Wind Mills, Why Not? at 8:34 AM 0 comments 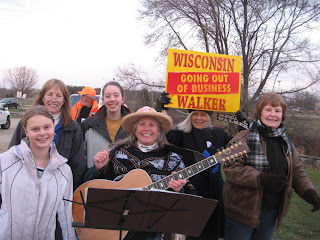 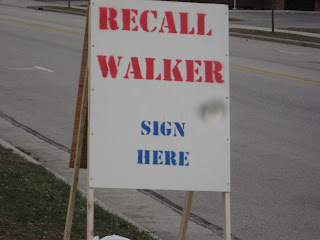 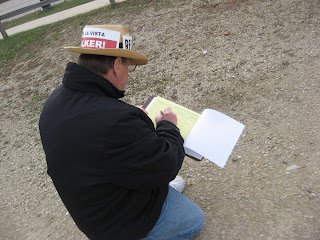 A Poem written for a rally in Princeton, WI where we had hunters stopping their cars to sign petitions to RECALL WALKER!

Recall Walker, compassion for all beings, take back our state and rights….but Carol wrote on my Facebook page:
Wake up-Walker was elected by a majority of the people and he's doing what we elected him to do.
A  close friend also wrote:
I like Luther Olsen and I love what Scott Walker has done to clean up the financial situation in Wisconsin -- and I sleep very soundly every night. I am also trying to help Walker in his defense.
Yes Carol, ok friend, I do not sleep well anymore. Many people in this state are not sleeping well, fear of losing their homes, their jobs, or out of work, because of Walker and his polices…..
I keep thinking of the sign in Madison in January, held by a young lady,
“It took Hitler 5 months to kill the unions. It took Walker 45 days”
Carol and my good friend, if you like following the play book of the 30' in Germany and you know what that brought.
If you want leadership by donation and money power
If you want to sell our natural resources to the highest bidder, to hell with saving the earth…
If you want to take away the right of workers to have a say about their pay, their healthcare and retirement,
If you want to not respect the firefighters, teachers, police, nurses, social workers and all those who serve us as public workers
If you want to destroy our public schools, and education for those kids who are challenged, the rural kids and kids in the city, those in poverty, all kids even the privileged you favor, your own….
If you support a special session of our leaders in Madison to create jobs and they play games the whole week and care nothing for the working folks of this great state
Then you want Walker and his Thugs, including Luther Olson, Luther I am calling you out brother, you are gutless and weak to follow this man, you will not win again….
Oh Carol, you asked me to wake up,  I am awake in the ancient tradition of the Buddha with compassion for all beings, justice for all beings, rights for all beings, even you Carol, and my good friend.
We have a choice, Recall Walker and his thugs, or live on a new plantation named Wisconsin under the Master Walker and his rich friends and thugs….what do You want?
I want freedom, I want to recall Walker!
The revolution will not be on tv, no reruns, because this revolution  is LIVE!

By ko shin Bob Hanson
Posted by Chasing Wind Mills, Why Not? at 9:09 PM 0 comments

Big News around here, first blog for a loooooong time, my second book, The Inner Passage, print on demand, Createspace.com and on Amazon now. I wanted to do this for family and friends, it has been a real interesting time. Poems, Photos and poems from a group of my fellow poets and friends. I know you will enjoy. Contact me at koshin@centurytel.net or here at the blog. I promise I will check more than every six months!

RECALL WALKER is the big move now we are all participating in. Over 300,000 signs so far and some time to go. If you are a citizen of WI be sure to join the movement to get rid of this guy and his thugs. Thanks!

We enter what I like to call a Sacred Time, the last month of the year (in the West) and the first of a new year, 2012. So many sacred paths and communities celebrate during this time, along with Christmas. On the 8th we celebrate the enlightenment of the Buddha, an auspicious time for many paths in the Buddhist tradition.

Deep bows of thanks and compassion to all and your families and friends, from Karen and I, and our five adult children and now twelve Grand Kids. Love and Peace....ko shin
Posted by Chasing Wind Mills, Why Not? at 10:57 PM 0 comments

The Dalai Lama’s ‘Deception’: Why a Seventeenth-Century Decree Matters to Beijing by Robert Barnett | NYRBlog | The New York Review of Books

The Dalai Lama’s ‘Deception’: Why a Seventeenth-Century Decree Matters to Beijing by Robert Barnett | NYRBlog | The New York Review of Books
Posted by Chasing Wind Mills, Why Not? at 10:56 PM 0 comments

Ash Wednesday: I'm Nobody! Who Are You?

Ash Wednesday: I'm Nobody! Who Are You?


I do not place this here for agreement but for a conversation about the foolishness of all this....in a time when we need to be practicing our spiritual ways to serve all beings not just a church or temple or synagogue. I hope you washed the ashes off....
Posted by Chasing Wind Mills, Why Not? at 10:55 PM 0 comments

Bangkok Post : Gender and religion: Where nuns fear to tread

Bangkok Post : Gender and religion: Where nuns fear to tread
Posted by Chasing Wind Mills, Why Not? at 10:27 PM 0 comments